Contractors who cut corners with asbestos put lives in danger.  That’s the message from WorkSafeBC after the agency issued more asbestos-related stop work orders and fines in the first eight months of 2017 than in all of 2016. Preventing exposure today “will prevent the disease in the future,” said WorkSafeBC vice-president Al Johnson.

More than 600 British Columbian workers died from asbestos-related disease in the past decade. In 2016, more than one-third of the 164 construction deaths in B.C. stemmed from asbestos-related illness. Asbestos is set to be banned in Canada in 2018 but workers still face exposure as escalating property values have triggered a rash in home demolitions, Johnson noted.

Good News!  The Province has established a cross-ministry working group to ensure that British Columbians are adequately protected from the hazards of asbestos

By aswan | News and Updates | No Comments

Across Canada, April 28 has been designated the Day of Mourning. 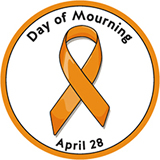 Workers, families, employers, and communities come together each year at ceremonies held around the province to remember those who have lost their lives on the job and to renew our commitment to creating healthy and safe workplaces.

Take part in the Day of Mourning

Workers, families, and employers are invited to visit dayofmourning.bc.ca to learn more and to participate. You can:

Mike Singh and his companies have been issued hundreds of orders for breaking rules in removing asbestos. Photo by Jenelle Schneider

A B.C. Supreme Court judge has thrown out a lawsuit by an asbestos removal company against WorkSafe B.C., labelling the suit “arrant nonsense.”

It’s the fourth such lawsuit against WorkSafe B.C. launched by Mike Singh, who operates Seattle Environmental Consulting Ltd., and his son Shawn Singh, who heads up ESS Environmental Ltd. All have been dismissed because the suits have been found to be without merit and are an abuse of process, according to the recently released ruling.

The Singhs have launched other complaints — all of which have failed — including to the B.C. Human Rights Tribunal, arguing that WorkSafe B.C. has maliciously singled them out for penalties for contraventions of asbestos removal in houses that are to be demolished. At times, the Singhs have said they have been discriminated against because they are Indo-Canadian.

“The ill-advised and unmeritorious litigation campaign that these plaintiffs have been waging, and continue to wage, against the Workers’ Compensation Board and its various representatives should come to an immediate end,” B.C. Supreme Court Justice Nigel P. Kent said in his 12-page ruling.

Read the whole article in the Vancouver Province

Finally, Canada to ban asbestos by 2018!

By Hazmat BC | Asbestos, News and Updates | No Comments

In a win for public health, Canada moves to ban asbestos

Canada will ban asbestos use by 2018, the federal government said Thursday, in a long-awaited measure aimed at protecting the health and safety of Canadians that is expected to eventually help reduce the rate of asbestos-related diseases.

“When it comes to asbestos, the science is…very clear,” said Health Minister Jane Philpott at a press conference. “We are taking action on this now to protect future generations of Canadians.”

She and three other federal ministers from science, environment and public procurement made the joint announcement Thursday morning at the Ottawa Hospital’s cancer centre. The “whole-of-government” approach means asbestos and asbestos-containing products will be banned by 2018.

Read the whole article in the Globe and Mail:

Richmond, B.C. – November 22, 2016: WorkSafeBC has launched an awareness campaign targeted to home property owners who are considering or undertaking renovations or demolitions regarding the dangers of asbestos in homes built before 1990.  The campaign runs until early 2017 across a broad spectrum of media including radio, television, print and social media.

This awareness campaign follows the results of recent research undertaken by WorkSafeBC of more than 800 adult British Columbians. The research confirms there is some public awareness of what asbestos is and where it may be located in a single-family home, condominium or townhouse built before 1990; however, the research also shows there are significant gaps in that knowledge that could put workers or others at risk of exposure to this deadly substance when undertaking a renovation or demolition.

Highlights of WorkSafeBC’s research findings are:

“Asbestos kills,” says Al Johnson, WorkSafeBC’s vice president of Prevention Field Services. “The relatively low level of awareness by home owners regarding the dangers posed by asbestos means workers and even family members can potentially be put at risk. Renovations and demolitions of older properties continue at a very high rate and homeowners need to be informed about the dangerous nature of asbestos and how to protect workers and themselves.”

Asbestos is the number-one killer of workers in British Columbia. In the ten years from 2006 to 2015, 584 B.C. workers died from diseases related to asbestos exposure.

In homes built before 1990, asbestos can potentially be found in more than 3,000 building materials such as linoleum, wall board and filling compound, textured ceilings, vermiculite insulation, pipe insulation, in furnaces or wiring, as well as many other places. Asbestos can be released into the air when these building materials are drilled, sawed, sanded or broken up during a renovation or demolition.

In such cases, workers can breathe in asbestos fibres if they are not protected. If workers breathe in enough asbestos, their lungs can be permanently damaged or they can get lung cancer. There is a long latency period (10 to 40 years on average) between the time(s) a worker breathes in asbestos fibres and when a disease can develop.

This public campaign is a further step by WorkSafeBC to build broad awareness that asbestos-containing materials are deadly. In addition to this public campaign, WorkSafeBC will be doing increased work in 2017 with contractors and other like professions to help them more fully understand their roles in keeping workers and others healthy and safe from asbestos when doing renovations or demolitions.

WorkSafeBC has many resources about how to stay safe around asbestos on its asbestos-specific websites at ThinkAsbestos.com, HiddenKiller.ca or on its website at WorkSafeBC.com.

WorkSafeBC is an independent provincial statutory agency governed by a Board of Directors that serves 2.3 million workers and more than 225,000 registered employers.  WorkSafeBC was born from the historic compromise between B.C.’s workers and employers in 1917 where workers gave up the right to sue their employers and fellow workers for injuries on the job in return for a no-fault insurance program fully paid for by employers. WorkSafeBC is committed to safe and healthy workplaces and to providing return-to-work rehabilitation and legislated compensation benefits.

The federal government should take immediate action to ban asbestos in Canada and establish an expert panel to review how the deadly substance is managed and disposed of in the country, a group of prominent organizations is urging, at a time when new annual numbers show asbestos is again – by far – the top on-the-job killer in Canada.

New data highlight the deadly toll of asbestos exposures on Canadian workers. Asbestos was the cause of death in 367 accepted claims in 2015, according to figures compiled by the Association of Workers’ Compensation Boards of Canada, making it the No. 1 workplace killer in the country. Since 1996, there have been 5,614 recorded work-related fatalities from asbestos.

An open letter, submitted to the Prime Minister Wednesday and released exclusively to The Globe and Mail, calls for a comprehensive asbestos ban and says Canada should follow the lead of Australia in establishing an asbestos management review process. The letter was signed by 68 groups, including the Canadian Teachers’ Federation, the Registered Nurses’ Association of Ontario and many large unions, along with more than 50 individuals, such as doctors, scientists, professors and families who have lost loved ones to asbestos-related diseases.  Unlike more than 50 countries around the world, Canada has never banned asbestos, and was a large exporter until the last mine closed in 2011. Despite a Liberal pledge to ban it, the mineral continues to enter the country in imports, such as pipes and brake pads. Medical experts say the number of deaths from asbestos-related diseases will continue to grow, because of the long latency periods and the impact of continued exposure.

Read the whole article in the Globe and Mail:

A year after the Liberals were elected with a promise to ban the use of asbestos in Canada, no such move has been made – inaction that is dismaying to health experts, labour groups and families affected by asbestos-related diseases.

“Our position, and the evidence, is as clear as it can be: that asbestos is a carcinogen that is a major cause of cancer, including lung cancers, that kill many Canadians,” said Gabriel Miller, director of public issues at the Canadian Cancer Society.

A ban “should be an as-soon-as-possible priority for the federal government,” he said.

Read the article in The Globe and Mail

A Lower Mainland asbestos-removal contractor said he plans to continue fighting the almost $280,000 in penalties he has been ordered to pay after being found in contravention of health and safety rules.

The fines, which were imposed on Seattle Environmental Consulting Ltd. in December and are related to incidents that took place from 2013 to 2015, were upheld last month by the WorkSafeBC review division.

Read the article in the Vancouver Province

Notice of 2016 Asbestos Inspection: Our prevention officers will be conducting planned inspections of worksites from July 1 to December 31, 2016, to ensure all jobsites are properly informed and equipped to safely remove asbestos-containing materials and are in compliance with the Occupational Health and Safety Regulation.

Asbestos exposure has affected too many lives.